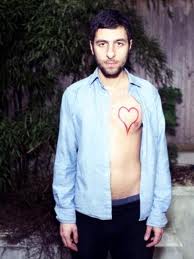 Sleater-Kinney continues to dominate the College Radio Album Chart, as their latest effort No Cities To Love has now spent four weeks in the top spot.  Four new albums join the countdown this week including the latest from JD McPherson and The Districts.  The big movers this week are from Jose Gonzalez (pictured), who leaps 57 spots to #8 and Father John Misty, who debuts at #3 with a 29 spot jump.  The Decemberists hang on to #2 on College Radio, but continue to be my #1 album.  Elevator, the sophomore release from Canadian indie rockers Hot Hot Heat turns 10 years old in April.  Please reacquaint yourself with the fun tune “Middle On Nowhere.” 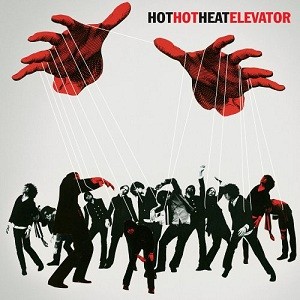 Baltimore, Maryland electronic musician Dan Deacon returns with his first studio album since his fantastic 2012 release America.  Recently, Mr. Deacon has been supporting Arcade Fire on their North American tour.  Check out the video for the tune “Feel The Lightning” below.

The British shoegazers Cheatahs return with a 5-song EP that follows their 2014 self-titled full-length debut.  The band recently shared a video for the track “Controller,” watch it below.

Here are the Indie Bands scheduled to perform on late night television for the week of February 23, 2015.  Check back throughout the week to watch the performances, or view previous weeks in the Indie On TV Alert page.

Monday = In The Valley Below 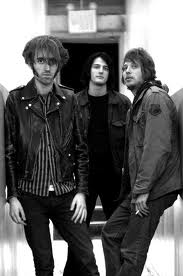 Sleater-Kinney holds on to the #1 album on College Radio for the third week in a row.  There’s very little change within the Top 20, as only two new albums join the countdown.  The first new addition is the sophomore effort from freak-folk singer-songwriter Jessica Pratt,  The second is the latest album from Brooklyn noise rockers A Place To Bury Strangers (pictured), their fourth studio album debuts in the Top 200 all the way up at #18.  The Decemberists are still #1 on my Spicy Six CD Chart.  Pretty In Black, the second studio album from The Raveonettes turns 10 years old this April.  Please enjoy “Love In A Trash Can.” 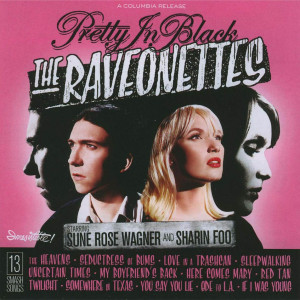 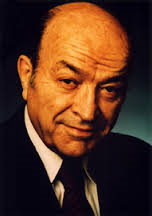 There are stunning developments in the ongoing crusade to locate a copy of the editorial delivered by Paul Long on Lyndon B. Johnson back in the late-eighties.  The mixtape produced by The Shark entitled “New Sounds In College” (tracklist below), contains THE most sought-after piece of audio from the Club Bamford years, albeit a partial recording.  The Depeche Mode dominated mixtape, which was under my bed this entire time, contains a 17-second audio-only clip of the editorial.  Sadly, it does not, I repeat does not, possess the portion about the teleprompter or the “what did he say” exchange.  We’ll take what we can get at this point. 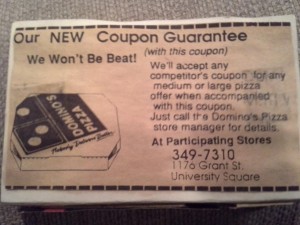 The Paul Long editorial rivals only the Coupon Guarantee as the most referenced subject in Club Bamford mythology.

Paul Long was a highly regarded Pittsburgh, Pennsylvania anchorman who worked at the ABC affiliate WTAE Action News from 1969 to 1994.  It wasn’t until around the late-eighties that Mr. Long began to develop a cult following, which still exists long after his untimely passing at the tender age of 86 back in 2002.

Let the crusade continue… Rumor has it that Gabes may have the entire copy. 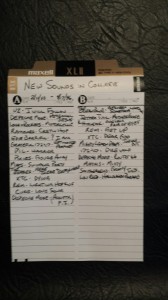 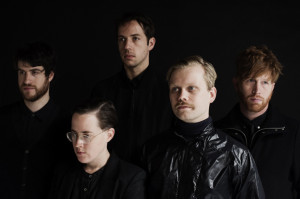 Baltimore, Maryland indie rockers Lower Dens have recently announced that their third studio album Escape From Evil will drop on March 31.  This is the first we’ve heard from the band since their solid 2012 sophomore album Nootropics.  In addition to the album announcement, they shared a video for the first single “To Die In L.A.” and revealed a handful of East Coast tour dates this spring.  If you enjoy the music of Beach House, you’ll dig Lower Dens.

Since Lower Dens is not playing the 2015 Coachella Festival, I will add them to my 2016 Coachella Perfect Poster Wish List, it’s never too early to start on that.

A Place To Bury Strangers

Brooklyn based noise rockers APTBS returns with their fourth studio album, and first since 2012’s Worship.  Check out the video for the album-track “Straight” below.

Singer-songwriter and Junip frontman Jose Gonzalez is releasing his third studio album.  This is Mr. Gonzalez’ first piece of solo material since his 2007 LP In Our Nature.  Here’s the video for “Teardrop.”

indie buzzband Slutever just released the Almost Famous EP on cassette tape.  If you’re interested in a digital copy visit the band’s page.  While you’re there, listen to all 6-tracks, “Open Wide” is a goody!

Here are the Indie Bands scheduled to perform on late night television for the week of February 16, 2015.  Check back throughout the week to watch the performances, or view previous weeks in the Indie ON TV Alert page. 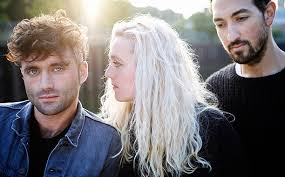 Sleater-Kinney has the #1 album on College Radio for the second week in a row.  Four new albums enter the Top 20, two of which debut in the Top 200. The first big debut is from Kingston, Pennsylvania’s pride and joy, Title Fight.  The second one comes from Nashville singer-songwriter Natalie Prass.  The other two new albums are from the Los Angeles six-piece Dengue Fever and the Liverpool based band All We Are.  The trio All We Are (pictured) shouldn’t be confused with the pretend band Are We Them.  The Decemberists are still #1 on my Spicy Six countdown, and will be there for quite some time.  The band’s latest album What A Terrible World, What A Beautiful World is truly the most perfect album.  Every song on this 14-track masterpiece is perfection!  This summer, Plans, the fifth studio album from Death Cab For Cutie turns 10.  Man, I can listen to the tune “Soul Meets Body” everyday of the world. 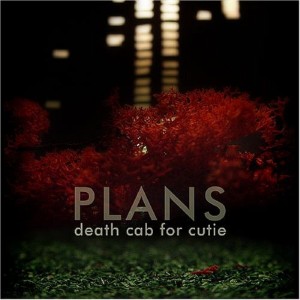 I Love You, Honeybear

This is the second studio release from J Tillman, aka Father John Misty.  The latest release by the former Fleet Foxes’ member is funny enough at times to make you shit yourself, so I’m told.  Who knew?  Watch the video for the track “Chateau Lobby #4 (In C For Two Virgins)” below.

English indie rockers Peace hail from Worcester.  This is their much-anticipated (at least in my world) sophomore release.  Their debut album In Love was one of the best albums of 2013, IMO.  These dudes are near the top of my list of bands that I really want to see live. If you dig FOALS, you’ll love Peace. Enjoy the groovy “Lost On Me” below.

Indie pop stalwarts Death Cab For Cutie have had a busy couple of weeks as they prepare for the release of the eighth studio album Kintsugi on March 31.

The Bellingham, Washington outfit have already shared the first single from the album “Black Sun,” and recently performed it live on Late Night With David Letterman.  Now comes the official video for the track which stars the living and breathing Ben Gibbard himself.

What’s more, the group has expanded their already lengthy world tour with more U.S. dates, support will be provided by The Antlers, Explosions In The Sky, Built To Spill, and everyone’s favorite band to type-out, tUnE-yArDs.  A glaring hole remains between the Mesa, Arizona show on April 10 and the Kansas City, Missouri show on April 23, leaving open the possibility of a Coachella late-add.  The band would fit perfect on the Sunday schedule that’s already EMO friendly.  If you’re interested, here are the actual tour dates.

The band is moving forward without guitarist Chris Walla, who recently departed after 17 years with the band.  However, the band confirmed that Mr. Walla was involved in every way with the making of the new album Kintsugi. 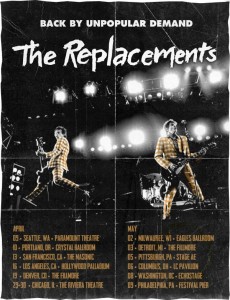 After reforming back in 2013, The Replacements have finally announced a U.S. tour entitled “Back By Unpopular Demand.”

The Mats will play a string of 13-dates, starting in Seattle on April 9, and finishing up in Philly on May 9.  Some of the notable stops include – an April 16 show at the Hollywood Palladium, and a May 5 show at Stage AE in Pittsburgh, Pennsylvania.  Tickets for the Hollywood show went on sale today, use the presale code BEATBOX.  Tickets are $69, of course they are.  Tickets for the Pittsburgh show are on sale to the general public on February 20, mark your Day-Timer.

The Hollywood show takes place on what is traditional known as Coachella Arrival Day, the Thursday prior to the Coachella Festival weekend.  My trip up to the Hollywood Palladium for The Mats, and then off to Indio, California, aka The Promised Land, should make for a long but very memorable day.  The group played the 2014 Coachella Festival almost exactly a year ago to the day.

Up to this point, the Westerberg and Stinson led band has mostly played festival shows over the last two years.  The band has left open the possibility of a new album down the road.  We shall see!

Here are the Indie Bands scheduled to perform on late night television for the week of February 9, 2015.  Check back throughout the week to watch the performances, or view previous weeks in the Indie On TV Alert page. 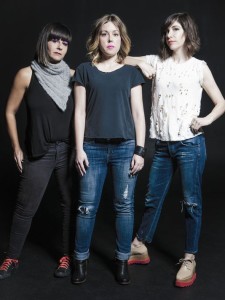 After two week in the top spot, Panda Bear slips to #2 as Sleater-Kinney (pictured) takes over at #1.  There are five albums that make their debut this week in the Top 20 including the latest efforts from Dr. Dog and Pond.  The debut EP from the Nashville, Tennessee indie band Bully finally enters the countdown at #18.  Bjork released her latest album digitally after it leaked prior to its original release date, she is in at #11. Finally, the sophomore release from the Australian indie band Twerps comes in at #10.  Descended Like Vultures, the sophomore release from Rogue Wave turns 10 later this fall, enjoy “Publish My Love.” 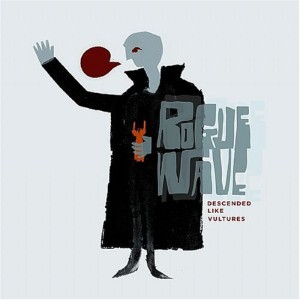 The DJ DEEp Spicy Six:
1. THE DECEMBERISTS  What A Terrible World, What A Beautiful World
2. PANDA BEAR  Panda Bear Meets The Grim Reaper
3. TV ON THE RADIO  Seeds
4. 2:54  The Other I
5. PARKAY QUARTS  Content Nausea
Dust this one off, it turns 10 in 2015!
6.  ROGUE WAVE  Descended Like Vultures

Here are the Indie Bands scheduled to perform on late night television for the week of February 2, 2015.  Check back throughout the week to watch the performances, or view previous weeks in the Indie On TV Alert page.