Bands on the Coachella lineup are notorious for dropping new music in the first part of April, this year is no exception.

Out today are albums from 2017 Coachella artists Father John Misty, Future Islands, and Guided By Voices.

Check them all out over on Spotify.

The first is from London-based indie buzzband Desperate Journalist, their sophomore release is Grow Up.

The second is from Scott Kannberg (Pavement) aka Spiral Stairs, his long-awaited sophomore album is called Doris and The Daggers.

Finally, drum roll please… the first album in nineteen years from the Heritage Act The Jesus and Mary Chain is out today!  Damage and Joy is the bands seventh studio album overall.

Stream all three on Spotify below:

The Jesus and Mary Chain

KASABIAN announced this morning the band’s sixth studio album For Crying Out Loud will be released on April 28 worldwide, allegedly.  If you can remember, the last time KASABIAN dropped an album, it finally found its way to the States a couple of months after the fact.  This is the follow-up to 2014’s 48:13.

The pride of joy of Leicester also shared the first single from the album entitled “You’re In Love With A Psycho.”  The tune is a tough find in the States.

Currently, only UK tour dates have been announced, I’ll keep you posted if North America is in their plans. 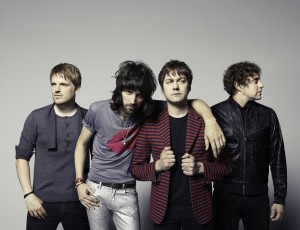 The full tracklisting is as follows:


Serge Pizzorno claims the album is about “saving guitar music from the abyss.”  Can’t Wait!

The video for “You’re In Love With A Psycho” hasn’t made it across the pond.

Listen below thanks to Orlandini Kasabian.

Bat For Lashes The Bride

Band Of Horses Why Are You Ok?

The Temper Trap Thick As Thieves

The Strokes Future Present Past (EP)

Whitney Light Upon The Lake

Band Of Skulls By Default

The So So Glos Kamikaze

Islands Should I Remain Here At Sea?

Twin Peaks Down In Heaven

We Are Scientists Helter Seltzer