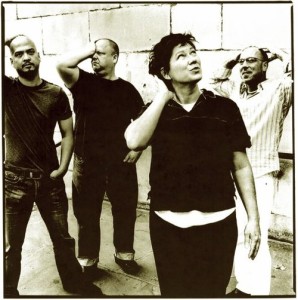 The last ten years seemed too good to be true… Non-stop touring, nearly every show available for download, physical copies of the show available twenty minutes later, Doolittle performed in it’s entirety for two straight years, and every show ending like it was something out of The Waltons.

Then we wake up this morning to find out Kim Deal has quit as bassist of the Pixies. Kim has yet to speak, however it was confirmed by the band in this statement from the Pixies facebook page: We are sad to say that Kim Deal has decided to leave the Pixies. We are very proud to have worked with her on and off over the last 25 years. Despite her decision to move on, we will always consider her a member of the Pixies, and her place will always be here for her. We wish her all the best.

Seems like the three of them are already moving forward without her. Sad to think that there might be future Pixies shows that won’t include Kim. I have been fortunate enough to have seen them nine times since they reunited in 2004. The shows will never be the same again.

Kim is currently on tour with her other band The Breeders. They’re celebrating the 20th anniversary of the classic alternative rock album “Last Splash” by performing it in it’s entirety.

The Pixies are currently taking time off after touring from 2009 – 2011 when they performed their second studio album “Doolittle” in it’s entirety.

Pixies frontman Frank Black recently revealed details of his latest project; an indie supergroup named Thriftstore Masterpiece. The band is described as “an all-star music collective devoted to paying homage to the underdog records of years past”. Joining Frank in the supergroup are Pete Yorn, Isaac Brock of Modest Mouse, Courtney Taylor-Taylor of The Dandy Warhols and Art Brut lead singer Eddie Argos, The group will release its first album, a revival of Lee Hazlewood’s 1963 debut ‘Trouble Is A Lonesome Town’, on July 8.

The Pixies lasted longer the second time around. Will there be a third time around?
That remains to be seen, Here We Go Again…