Peter Murphy is an English alternative rock solo artists and more importantly the lead singer of the legendary highly influential gothic rock band Bauhaus. The term “gothic rock” has been around since that late sixties however, it wasn’t until the late seventies post-punk gothic movement that the scene began to explode in the U.K. Bands that established and sparked this movement included Joy Division, Siouxsie and The Banshees, The Cure, Echo and The Bunnymen, and Bauhaus. During the movement dark raincoats hit record breaking sales all over the world.

Bauhaus formed in Northampton, England in 1978 and it’s members included:
Peter Murphy (Vocals), Daniel Ash (Guitar), David J (Bass), and Kevin Haskins (Drums). After only being together for six weeks the band recorded and released the nine minute plus single “Bela Lugosi’s Dead.” This song’s impact on the band’s career and the gothic rock movement is monumental.

When the band split up in 1983 Peter Murphy embarked upon a solo career while the other three members continued with the side project Tones On Tale, and then in 1985 formed the band Love and Rockets. Over the course of a 28 year solo career Peter Murphy has released eight albums that includes the noteworthy Love Hysteria (1988) and Deep (1989). The album Deep produced the alternative rock anthem
“Cuts You Up” (watch below). 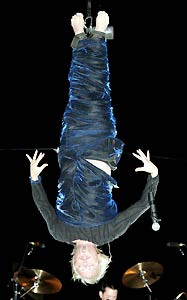 Bauhaus reunited briefly in 1998 for The Resurrection Tour and then again in 2005 for the Coachella Music Festival. In my ten years of attending the Coachella Festival the spectacle of Peter Murphy being lowered upside down to the stage while singing the 9 minute and 33 second “Bela Lugosi’s Dead” (watch below), ranks as one of my favorite Coachella moments. In an interview with Spin Magazine back in 2011 Peter Murphy had this to say about that Coachella performance. “There is a maximum amount of time before you black out; it’s 15 minutes or something. I was okay with that. So I got some hanging boots they use in Pilates exercise, and during rehearsals I got my crossbar set up. The technical difficulty is in the muscles. The vocal muscles are in reverse because of gravity, so you have to teach these new muscles how to sing.”

Bauhaus stayed together again from 2005-2008 and released the album Go Away White in 2008, before disbanding. A statement released by the band shortly after the breakup cited that they were getting along really well but didn’t want to continue as a working unit.

GoINDEEpMusic will be out at the Crescent Ballroom in Phoenix, Az. on Saturday July 13 for the Peter Murphy all Bauhaus experience.

Check out Peter Murphy’s classic video “Cuts You Up” here: