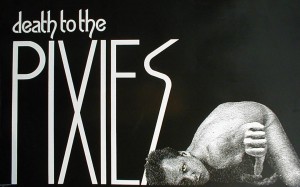 HOW FUN! Non stop Pixies news! Today the band released a second video for the single “Bagboy” via Rolling Stone. Frontman Frank Black had this to say about the reasoning behind a second video:

“We didn’t set out to have two music videos for ‘Bagboy,’ but once we saw both of these, we knew we didn’t want to use just one. They’re so good, so creative, and each in its own way, and both made by up-and-coming filmmakers. …Who says you can’t have two videos for a song that show two completely different perspectives? Not us.”

In the meantime, you decide which video you like best.
See you at the EL REY!