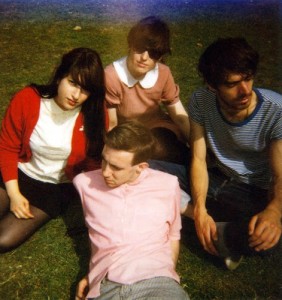 This week we Shine the Sunday Spotlight on Veronica Falls.

Veronica Falls are an English indie pop band that formed in 2009. The London based foursome is a merger of the two bands The Royal We
and Sexy Kids. The band consists of Roxanne Clifford and James Hoare (both on vocals and guitar), Marion Herbain (bass), and Patrick Doyle (drums).

The band’s indie jangle pop sound is equivalent to the mid-eighties British C86 bands. C86 is an eighties cassette compilation distributed by British magazine NME. The cassettes tapes were so influential that C86 became its own musical genre that was characterized by jangling guitars and melodic power pop. Veronica Fall’s music is heavily influenced by the Glasgow, Scotland band The Pastels.

The self-titled release in 2011 produced the singles “Found Love In A Graveyard” and “Beachy Head.” The current album was released back on February 12 and the singles “My Heart Beats” and “Teenager” were released in advance of the February drop date. Recently, the band released the track “Waiting For Something To Happen” as the third single from the album.

If you’re a fan of bands currently part of the C86 movement in NYC such as Vivian Girls, Crystal Stilts, Dum Dum Girls, and of course The Pains Of Being Pure At Heart, then you’ll dig Veronica Falls.

Check out the video “Teenager” here:

Check out the video “Waiting For Something To Happen” here: