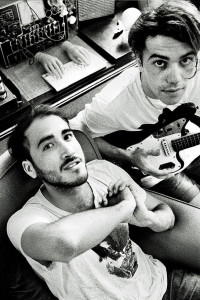 Every Sunday we take an INDEEp look into an emerging indie artist. This week we Shine the Sunday Spotlight on Jagwar Ma.

Jagwar Ma are an indie dance band from Sydney, Australia. The three piece formed in 2011 and consists of Gabriel Winterfield (lead vocals, guitar, loops), Jono Ma (guitar, synths, drum machine, samples), and Jack Freeman (bass, backing vocals). The group’s name is derived from Jono’s surname and a painting of a jaguar passed on to them by a friend. Their debut full-length Howlin’ is kick-ass, and has received nothing but praises since it dropped on June 11. The band’s sound is heavily influenced by groups from the Madchester scene of the late-eighties and early-nineties such as Happy Mondays, Primal Scream, and The Stone Roses. Combine the Madchester sound with a hint of chillwave, and what you’re left with is Jagwar Ma. It only takes one spin of Howlin’ and you’re hooked, trust me.

Check out the video for “Come Save Me” here:

Check out the video for “The Throw” here: