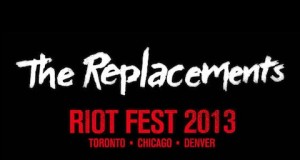 The reunited Replacements took to the stage for their first show since 1991 tonight in Toronto. The historic event happened earlier this evening in the headline spot at Riot Fest. Paul Westerberg and Tommy Stinson recently chose Josh Freese and David Minehan as touring members for their three Riot Fest dates. The fine folks at Slicingupeyeballs.com have been following the event minute by minute… check out all the coverage at the link below. Looks like the band had some fun t-shirts made for the event. The Replacements next show is September 15 in Chicago.