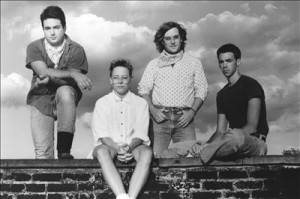 Guadalcanal Diary was an alternative rock band that formed in 1981 in Marietta, Georgia. Fortunately for the band, they were lumped into the American college radio music scene from Athens, Georgia. Athens was the birthplace of well-regarded bands such as The B52′s, Pylon, Love Tractor, Dreams So Real, Flat Duo Jets, and of course R.E.M.

After making a name for themselves in the Southeast, the band was signed to DB records out of Athens. In 1983 the band released the EP Watusi Rodeo, and a year later their debut full-length Walking In The Shadows Of A Big Man. The LP was produced by Don Dixon (Dumptruck), who is best known for his work on co-producing the critically acclaimed debut full-length “Murmur” from R.E.M. After receiving positive vibes, the band signed with Elektra in 1985 and the studio rereleased WITSOABM along with the single “Trail Of Tears,” while the band worked on their major label debut Jamboree. Unfortunately, the 1986 release Jamboree was not well-received so the band went back to work with Don Dixon moving forward. The result was the 1987 masterpiece LP 2X4, which produced the modern rock hits “Litany (Life Goes On)” and “Get Over It.” Prior to disbanding in 1989 the jangle rocksters released their fourth and final album Flip Flop. The album is known for its catchy alt-hit “Always Saturday” (sing-along with the video below… I known you want to).

The band reformed in 1997 and toured until 2000, while self-releasing a live recording At Your Birthday Party in 1999. In 2011 they temporarily reunited to celebrate their 30th Anniversary at Athfest (an annual festival held in Athens, Georgia to promote local music). Band members have remained busy throughout the years with solo work, producing, and family life.

2X4 is an album that should be part of everyone’s wall of sound. If you can grab a copy of the expanded remastered release, even better. The album has shown up on a few of those fun best albums of the eighties lists. I remember having the tune “Litany” on repeat back in 1987. Luckily, it was the lead track on the cassette tape so it was easy to find.

Check out the video for “Litany (Life Goes On)” here:

Sing-along with the video to “Always Saturday” here: