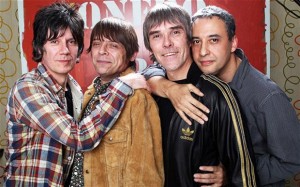 Madchester legends, The Stone Roses, have announced that the documentary film Made Of Stone will hit U.S. theaters on November 6. The film, directed by Shane Meadows, chronicles one of the most improbable reunions of all-time. On December 3 MVD Entertainment Group plans to release the film on Blu-ray, DVD, and VCR Tape. Made Of Stone will make a great stocking stuffer for the hardcore Stone Roses loved one in your life. To this point, the two 2013 Coachella Festival dates remain the only U.S. shows The Roses have played.