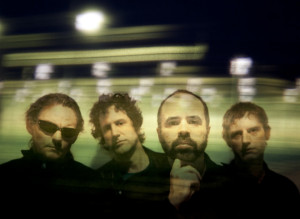 Swervedriver is an English alternative rock band that formed circa 1989. The Oxford based band is best known for their influential contributions to the British shoegazing movement of the early nineties. Initially, the band was active between 1989-1998 having multiple line-ups and releasing four studio albums. The two mainstays are singer/guitarists Adam Franklin and Jimmy Hartridge.

The band debuted in 1990 with a series of three critically acclaimed EP’s prior to releasing their full-length debut Raise in 1991. Each EP produced a single; Son Of Mustang Ford, Rave Down, and Sandblasted, all would eventually be included on Raise. The album Raise is a brilliant piece of early nineties British rock that should be on everyone’s wall of sound.

After a lengthy U.S. tour supporting Soundgarden, they experienced a line-up change before releasing two more EP’s and then their sophomore album Mezcal Head in 1993. The well-received classic album fuses a mix of Shoegazing and grunge with a hint of American indie. The album produced two alternative rock singles “Duel” and “Last Train To Satansville.”

Due to a palethra of record label issue, the band’s third album Ejector Seat Reservation was never released in North America. Going against the band’s request the label chose “Last Day On Earth as the lead single. The idea was to capitalize on the popularity of Btitpop at the time. because the song sounded as close to Oasis as they were going to get. The band’s poorest selling album is still held in high regards with the critics, but still remains an import-only in the States.

Shortly before breaking up in 1998 the band signed a three-album deal with DGC Records. In typical Swervedriver fashion that deal went to hell quickly for a number of reasons. They were able to get their final record 99th Dream released through an independent source, along with two more EP’s before calling it quits.

After much-spectulation Swervedriver reunited in the Fall of 2007, citing the success and positive reaction the Pixies had received since 2004. The band kicked-off their reunion tour at non other than the Coachella Music Festival in AoPril of 2008. Now I don’t consider myself a “Swervie” but I was extremely excited about the event….. I ran from the beer garden to the Mojave to ensure my spot on the rail. Eventually, the rest of the deepsters arrived on the scene and at that point I finally turned around to see there wasn’t anyone else in the tent. How embarrassing! ….. not for me, for America.

This week the band released their first piece of recorded music in nearly 15 years. The song “Deep Wound” first surfaced on Jimmy Fallon back in 2012. The new single was made available on iTunes this past Tuesday. Listen to the track below.

Watch the video for the new song “Deep Wound ” here:

Watch the video for Rave Down” here: