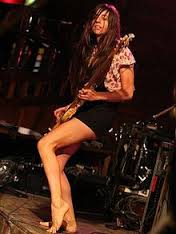 Without even an official whisper from the band concerning the termination of touring bassist Kim Shattuck, earlier this morning the Pixies announced her replacement. The band revealed that Paz Lenchantin will be the bassist on their forthcoming 2014 tour in North and South America, and Europe. Lenchantin, whose resume includes A Perfect Circle and Billy Corgan’s (Smashing Pumpkins) side project Zwan, takes over for the recently departed New Kim and original bassist Old Kim. Although it can’t be confirmed, we can only assume that Ms. Lenchantin’s middle name has to be Kimberly.

“We are really looking forward to playing with her on these dates. Working with different bass players is very new for the band, but we’re having a great time doing it.”

In addition to the bassist announcement, the Pixies also unveiled yet another video, this time for the EP-1 track “Another Toe In The Ocean” (watch below).

I look forward to seeing Paz in Phoenix on February 24, and again Weekend 1 of the Coachella Music Festival in April.

Watch “Another Toe In The Ocean” here: