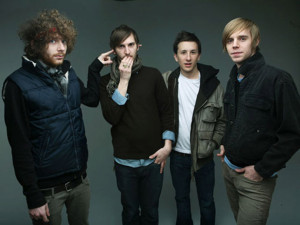 Bear Hands are a Brooklyn based alternative rock band that formed in 2006. The four piece released their debut full-length Burning Bush Supper Club back in 2010, seriously, I didn’t make that up. That LP was sandwiched between the EP’s Golden (2007) and Songs From Utopia Vol. 1 (2012).

Is it just me, or is there waaaaaaaaaay more alt-rock bands than usual on this poster?