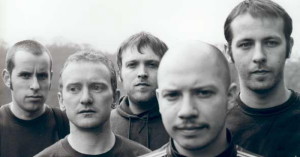 Mogwai are a cosmic rock band that formed in 1995 in Glasgow, Scotland. The band’s musical style is described as of lengthy instrumental guitar-based pieces, that add in dynamic melodic bass lines, and a heavy use of distortion and effects. “Serious Guitar Music” is what the band claims they’re going after. The key figure in making all this happen is guitarist John Cummings.

Mogwai says their influences include My Bloody Valentine, Sonic Youth, The Cure, and the Pixies. Well there you go, I can’t go one day without mentioning the Pixies.

The band has released 8 studio albums and numerous EP’s over a nineteen year career. The most recent, Rave Tapes, coincidentally was released today.

“Hunted By A Freak”