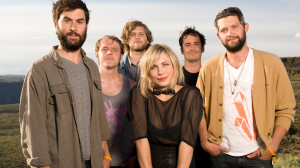 Check out previous days here.
Day 11 = The Head and The Heart
Performing = Saturday

The Head and The Heart are an indie-folk band that formed in Seattle, Washington in 2009. The band formed when they met while
playing a series open mic nights at a local Seattle pub.

The band self-pressed and hand-made the sleeves of their debut eponymous LP in 2011. After local trendy record stores couldn’t keep enough copies in stock, the band signed with hometown Sub Pop . The label re-released the album, and it went on to become one of the best-selling debut albums for Sub Pop in years.

The band released their sophomore album Let’s Be Still back in October. If you’re someone who checks out the Indie On TV page… you’ll already know that the band has played just about every late night program lately. The Head and The Heart have toured extensively over the last couple of years, supporting the likes of Death Cab For Cutie, My Morning Jacket, The Decemberists, and Vampire Weekend.

Visit The Head and The Heart website here:
http://www.theheadandtheheart.com/

“Lost In My Mind”