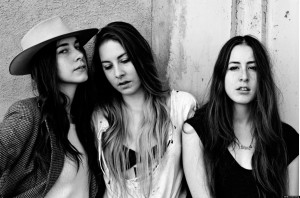 HAIM are an indie pop band that formed in 2006 in the San Fernando Valley, California. The band consists of the three Haim sisters Alana, Danielle, and Este, along with drummer Dash Hutton. The ladies pronounce the band’s name and their last name HAIM as Hyme (as in rhymes with rhyme). Occasionally, you’ll run across someone who calls them HAME, these folks either just found out about HAIM or they don’t like HAIM, so they call them HAME. Sometimes I call them HAME, only because I think it’s fun to call them HAME.

The girls grew up around music, their parents were part of a 70′s cover band called Rockinhaim (pronounced rock-in-hyme). I wonder if people that didn’t like band called them Rockinhame…

HAIM’s music is described as “nu-folk meets 90′s R&B,” how bout that one Present Tense. They’ve been compared to Fleetwood Mac, however the sisters insist their influences are not of the Heritage Act variety, they cite Destiny’s Child, TLC, and Mariah Carey. Personally, I dig them, but IMO they sound like a cross between Quarterflash and Til Tuesday meets The Eagles.

Like many acts recently, it felt like HAIM released every song on their full-length debut Days Are Gone as a single prior to releasing the album…. didn’t it? The single “Forever” put the ladies career in motion by first conquering the U.K. in 2012, and with the assistance of Sirius XMU, the States followed in 2013. Following “Forever” the band released the singles “Don’t Save Me,” “Falling,” and “The Wire.”

Earlier this week HAIM released a video for their latest single “If I Could Change Your Mind” (watch below), possibly my favorite track on the album. The ladies continue their quest to take over the world in 2014 by playing every festival known to mankind. I’m guessing around 5 o’clock on the Outdoor Stage with temperatures in the upper 90′s for this one.

Recommended listening:
“If I Could Change Your Mind”