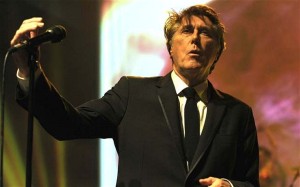 On Day 68, I think it’s fitting that I showcase the 68 year-old English singer-songwriter and musician Bryan Ferry. In addition to being best known for his work as the frontman of the legendary glam rock band Roxy Music, Mr. Ferry has had a solo career that’s span the better part of the last forty years.

Roxy Music formed in 1971 and have taken extended breaks on two occasions. They’re still currently together, playing live sporadically since 2001. Prior to 2001, the band was active between 1979 to 1983, and originally from 1971 to 1976. The group has released eight studio albums, all prior to 1982, and most were well-received in the U.K. Early on, the band’s unique sound and style was associated with Ferry’s infatuation with Beatles influenced art pop, and Brian Eno’s love for experimental rock, most specifically The Velvet Underground. The creative tensions grew between the two, and eventually Eno exited. At the zenith of the band’s commercial success, Ferry left to focus on his solo career, but he always returns.

Ferry has been actively releasing solo material since 1973. Most of his albums at the start were collections of cover songs. It wasn’t until his fourth album in 1977 that he finally released original material. Mr. Ferry reached the height of his solo success worldwide in the mid-eighties with the release of the albums Boys and Girls in 1985. and Bete Noire in 1987. Overall, he has issued fourteen studio albums, the most recent being The Jazz Age in 2012, under the moniker The Bryan Ferry Orchestra.

What’s really neat is that Bryan Ferry’s solo shows include a beautiful mix of Roxy Music, solo material, and covers. Some of the tunes that Roxy Music are best known for include: “Virginia Plain.” “Do The Strand,” “Love Is The Drug” and “More Than This.” Ferry has enjoyed commercial success with solo tunes such as: “Slave To Love,” “Kiss and Tell” and “The Right Stuff.”

No telling when and where Ferry shows up on Friday. Midnight in the Gobi would be fun!