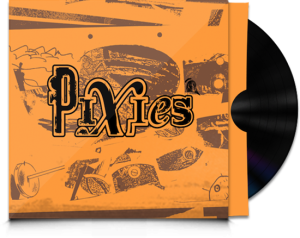 The Do-It-Yourself band the Pixies continue to execute innovative ways to make money hand over fist. The latest effort has the band releasing their first album in nearly 23 years on April 29. The album entitled Indie Cindy, is a double LP/CD that includes all 12-tracks that have already been released as new music on EP’s 1, 2 and 3, along with a 13-track live set.

In addition to the album announcement, the group unveiled its third installment of their EP collection, conveniently titled EP3. The 4-track extended play includes the single “Bagboy,” which was the first new tune to drop last June, and “Silver Snail,” a song that has made regular appearances in recent live sets. The EP’s final two tracks are brand new tunes, “Ring The Bells” and “Jaime Bravo.” It appears that the digital download is currently only available with the purchase of a limited edition 10-inch exclusive vinyl EP, or by pre-ordering the Indie Cindy album. I could be wrong, but I’m probably not. The songs are currently available as separate song downloads on iTunes, inside the pre-order Indie Cindy download. By the time you’re reading this, it could all change, or when the 3,000 copies of limited edition vinyl dries up.

In what has become tradition with Pixies announcements, the band shared yet another video, “Snakes” from EP2 (watch below). In addition to “Snakes,” I’ve included the video for “Greens and Blues”. I never posted that video when it was released three weeks ago because… I forgot. Just kidding, I don’t forget anything, I was just too busy writing about bands I have no intention of going to see at the Coachella Music Festival next month.

As expected, the Indie Cindy album is available in a plethora overpriced variations and formats. I’ve attached the link to the Pixies website (below) in order to for you to best choose which confusing format fits your listening needs, and more importantly, into your budget. Here’s my suggestion… Once you’ve already purchase all three EP’s, make a playlist that’s identical to the tracklist shown below, and then hit “burn playlist to disc,” BAM! you have Indie Cindy immediately on compact disc. Impress your friends by bragging about what an innovative DIY Pixies fan you are!