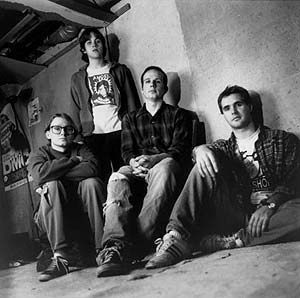 Just when you thought it was safe to listen to your favorite indie rock radio station or surf the world wide web, this appears.  The fine folks over at Stereogum felt compelled to post an article that chronicles the 30 most essential EMO tunes of all time.  An interesting part of this piece is that the list begins circa 1994 and concludes eight years later in 2002.  Call me crazy, but I first time I starting hearing the ugly term EMO was right around the time that this list cuts off.

The more I accidentally dive into the subject of EMO, the more confused I become.  It seems as if some of the post-hardcore bands from the mid-nineties have been categorized as EMO, well after the fact.  I listened to bands such as, Jawbox, Quicksand, Jawbreaker and Hum (pictured top) back in the day, and if I knew they were EMO I would have avoided them at all cost, well maybe.  Watch Hum’s video for “Stars” below.  Furthermore, I’m sorry, but Husker Du is not EMO, never was and never will be.

A few weeks ago I was surprised by many of the selections for the special episode of the Old School show on Sirius XMU featuring nothing but “EMO.”  I remember diggin’ the tune “Drive On To Me” by the Louisville, Kentucky band Elliot (pictured below) at the turn of the century.  Who knew at the time I was listening to EMO, as it was included on the shows EMO playlist?  Listen to the tune below and decide for yourself,  sadly I guess I had EMO tendencies back then…

Writer Patric Fallon points out that this list is from “the golden era of EMO,” an eight year period of time that coincidentally is when I’ve always argued that some of the worst music was released in my lifetime, and quite possible ever.

The more the subject of EMO occupies my time, the more frustrated I get.  However, the mention of EMO always brings me back to one certainty, Jimmy Eat World is EMO, always was, and always will be.  EMO is in the eye of beholder.  Thoughts?

Listen to “Drive On To Me” by Elliot here:

Spoon Release Video For Single “Do You”
Top Albums For The Week Of July 22, 2014