Let’s put a lid on EMO week once and for all. 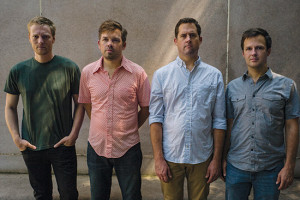 The Dismemberment Plan is an indie dance-punk band that hail from The Nation’s Capital. Some may argue that The D-Plan are EMO (Jenny LSQ), while others cringe that the dreaded EMO label is attached to the band. There, EMO twice in one sentence. The Washington D.C. based quartet formed in 1993, and have been able to keep the original line-up together with the exception of founder Steve Cummings, he departed after recording the debut album. The band is named after a line from the 1993 movie Groundhog Day.

From 1993-2003 the band released four studio albums and toured extensively. In the early 00′s they broadened their fan based by touring with Pearl Jam, and then later with Death Cab For Cutie. The critically acclaimed 1999 release Emergency & I, was named by Pitchfork Media as the #1 Album Of The Year and #16 Album Of The Decade. Upon the album’s release, Pitchfork scored it a 9.6 on a scale of 10, which I believe is supposed to mean it’s good, Jake Fogelnest would know better.  The band’s 2001 album Change received similar attention by the same publication, as it was recognized as the #14 Album Of The Year and #97 for the Zero’s.

The band split in 2003, but later reformed briefly in 2007 to play a few charity shows to raise money for the sick son of J. Robbins, frontman for the fellow D.C. based band Jawbox. The Plan reunited again in 2010 in support of the Emergency & I reissue, and have been together ever since. Their fifth studio album Uncanney Valley was released last October.

The group’s influences include Fugazi and Jawbox, while they’re known for adding R&B and a hip-hop element to dance-punk. They’re an instrumental influence on some of the indie dance rock that surfaced in the early zero’s such as LCD Soundsystem, The Rapture (recently broken up), Radio 4, and !!! (Chk Chk Chk), not to be confused with the debut album by The Dismemberment Plan with only one Chk.

Check out some tunes from The Dismemberment Plan below: