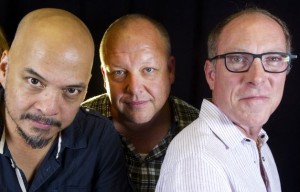 In advance of their brief 11 dates in North America set to begin next Saturday night in San Diego, Frank Black and Co. have emerged with a video for “Ring The Bell.”  Also included on the tour is a night at the Hollywood Bowl next Sunday, as well as a string of four dates in Canada in early October.  Currently tickets still remain for nine of the eleven shows, that will happen when tickets are way overpriced.

“Ring The Bell” joins the collection of tracks from the band’s latest album Indie Cindy that the Pixies took time out of their busy schedule to make a video for.  Actually, two fans, Lital Mizel and Adi Frimmerman directed and appear in the video, read all about it here.  I think there’s only one more tune from Indy Cindy that needs a video, but I’m not the person who keeps track of things like that, so I could be wrong.  To clear up ongoing confusion about the tune “Ring The Bell,” it’s not a cover of the Anita Ward disco classic.