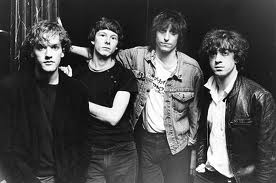 This Saturday (November 22) the documentary “R.E.M. By MTV” will premiere on both Palladia and VH1 Classic at 6pm Pacific Time.  The film by Alexander Young, documents R.E.M. from their early stages of becoming College Rock icons to their peak as America’s best rock & roll band.  In addition, it features drummer Bill Berry’s departure and the band and moving forward as a trio, to eventually the group’s retirement in 2011.

The film will be included in the R.E.M. box set entitled “REMTV.”  For those unfamiliar, the 6-DVD box set will include, but not limited to the follow treasures:  MTV Unplugged 1991 & 2001 with outakes, VH1 Storytellers, Rock & Roll Hall Of Fame induction ceremony, live footage from around the world throughout the band’s entire career, along with the film “R.E.M. by MTV.”  I have to admit , when I first heard about this monster load, the fist thing that came to mind was… who raided my VCR tape collection?   View the entire 6-DVD collection tracklist here.  The collection drops Monday November 24 and should be available in your favorite DVD retail outlets, or you can order it here.  “REMTV” makes a great Christmas gift for the hardcore R.E.M fan in your life.

This completes a busy year for the retired rock stars.  Earlier this year, the legendary Athens, Georgia band unveiled a massive collection of over 130 rarities that spans their entire career, along with the entire MTV Unplugged Sessions from 1991 and 2001 on compact disc as well as on long player.  In addition, the group made available for the first time through iTunes their debut EP Chronic Town in a standalone digital CD download.  Can’t wait to see what 2015 has in store for the retired legends.

Watch the trailer for R.E.M. by MTV here: