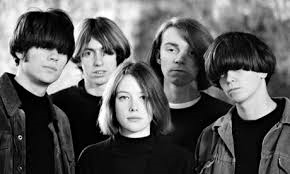 GoINDEEpMusic will be out at the Ace Hotel tonight in the friendly surroundings of downtown Los Angeles for an evening of elegant shoegaze with English indie rockers Slowdive.  The pedal pushing phenoms reunited earlier this year after splitting up in 1995.

The shoegazing specialists were formed in Reading by Neil Halstead and Rachel Goswell back in 1989, and the two share guitar/vocal responsibilities.  The rest of the quintet consists of bassist Nick Chaplin, drummer Adrian Sell, and additional guitarist Christian Savill.  Over a six year career the band released three critically-acclaimed albums along with a handful of extended plays.  The band credits Pink Floyd and the Sex Pistols as their influence.  For those that enjoy fun facts, Slowdive was once known as The Pumpkin Fairies early on.

The band has been on tour since May, playing 27 music festival, not quite Outkast numbers, but still impressive.   The North American leg of the tour concludes with two nights at the Ace Hotel in Los Angeles.  The setlist for the reunion tour was constructed by an online survey, Halstead says that “kids” could vote on what they wanted Slowdive to play.  Call me crazy, but the first “kid” I see tonight will be the only “kid” I see tonight.  The five-piece plans to return home and hit the studio in hopes of putting together a new album, we’ll see where that goes.  In a recent interview, Mr. Halstead indicated that the band has no aspirations of becoming a Heritage Act, or hitting the Heritage circuit.  With a limited catalogue, the band has no use for playing the same songs night after night.