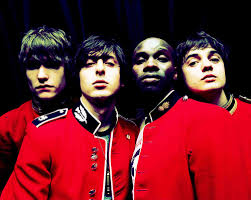 British indie rock band The Libertines recently announced their plans to release a new album in 2015.  The recently reformed group had reunited back in April and played their first show in four years on June 28 in Glasgow, Scotland.  Last month the band announced a album deal with Virgin EMI Records, and now comes the news of their first album since the self-titled 2004 release.

Apparently, frontman Pete Doherty is once again clean, he’s attending a rehab facility in Thailand where is announcement was made.  Mr. Doherty had this to say on the news: “I don’t know what to say, I’m so happy, It was a beautiful day.”  Bandmate and fellow frontman Carl Barât, added: “After everything we have been through The Albion sails on course again, I couldn’t be more excited.”

The highly-regarded indie band formed in 1997 and released two albums before their ugly split in 2004.  The group was instrumental in spearheading the garage-rock revival movement in the early 00′s.  Add The Libertines to my Coachella 2015 Perfect Poster Wish List.