Shout, Shout, Let It All Out!

GoINDEEpMusic will be out at the Belly Up Tavern in Solana Beach tonight for an evening with Tears For Fears.  Roland Orzabal and Curt Smith will bring their eighties synthpop to San Diego County’s premiere live music venue.

I was lucky enough to check my electronic mail the moment the show was announced and scooped up a ticket immediately. Tickets went like hot cakes within minutes, so if you hesitated, you’re shit out of luck. 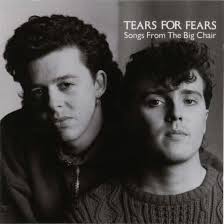 I’ve adored this band from the moment I heard songs from their 1983 release The Hurting.  I can remember laying in bed listening to Rock Over London when I first heard songs like “Change” and “Pale Shelter.”  For those unfamiliar with Rock Over London, it was a syndicated radio program that usually aired sometime around midnight on Sunday night back in the eighties.  The show offered up some of the best British music that wasn’t available here in the States at the time.  After a lengthy kickass playlist, the show would conclude with the Top 5 songs on the U.K. charts that particular week.  The show is fully responsible for my love and appreciation of the British bands of the early to mid eighties, especially Tears For Fears.   I used to go to mall and ask the clueless associates working at National Record Mart, “do you have any Tears For Fears?” and they would always respond with “never heard of them.”

By the time band release the 1985 follow-up LP Songs From The Big Chair, their music became slightly more accessible and I was first in line to pick up a copy of SFTBC on cassette tape.  Here’s a fun fact about DJ Deep, the first compact disc I ever purchased after adding a CD player to my stereo system was The Hurting.  Tonight’s show is a long time coming…  I’ve never seen TFF before, and I can’t believe I will be taking it all in at my favorite live music venue, the Belly Up Tavern.  No word if there’s an opening act tonight.  Can’t wait!

Two weeks ago, to celebrate the 30th anniversary of their blockbuster album “Songs From The Big Chair,” Tears For Fears convened in the historic LA Studio The Village to perform some of their biggest hits for an intimate audience of 50 superfans. Watch the performance below, and listen to an expanded version (including a  cover of the Radiohead tune “Creep”) only on Spotify Landmark.