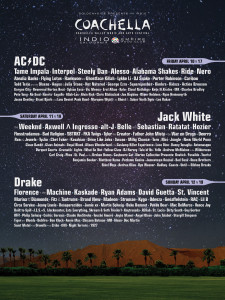 The 2015 Coachella Music Festival lineup was unveiled this morning by the festival tweeting out an image of the lineup and the phase “For Those About To RT.” Tweeting the lineup, how fun!

The three night festival features identical lineups playing over two weekends. Weekend 1 takes place April 10-12, while Weekend 2 happens April 17-19. As usual, Arrival Day is held the Thursday night prior to the festival and Reflection Day remains the Monday morning after the extravaganza.

For those who care, the irrelevant headliners include: AC/DC on Friday, Jack White on Saturday, and Drake on Sunday.  If you’re considering going and don’t have a ticket, you have until Noon January 7 to consider, so consider fast.

After having roughly 12 hours to digest the lineup, here are a few random thoughts on the 2015 poster:

*The omission of The Black Keys can only mean one thing, there’s a new house band at Coachella, congratulations Florence and The Machine.

*Where are the usual 80′s Heritage Acts? The festival is known for always having a handful 80′s bands. Beware Cool Dads, you’re not welcome here anymore.

*It’s obvious that the font in my world is not the same size as the font in Coachella’s world. In my world, bands like Parquet Courts, The Orwells, Cloud Nothings, and KASABIAN are in much larger font, just sayin.

*For the second year in a row line 2 is incredibly weak. Where are bands like Spoon, TV On The Radio, The National, The New Pornographers, and Death Cab? Out with old, in with the new?

*Kudos to Coachella for procuring Ride, I believe the Weekend 1 show could possibly be their first reunion show.

*Those relieved to see Lana Del Rey left off the poster this year should worry.  Ms. Del Rey is performing under the moniker Florence and The Machine, see it?

*In addition to Cool Dads, indie buzzbands are not welcome at Coachella anymore, how sad.  Remember when the bottom half of the poster used to be populated with them?

*Brilliant move by placing The Cribs on the bottom line on Day 3. Now, when the band cancels again… its easy on, easy off.

*The Libertines and Katie Bush would have been a nice treat

*I can just taste the Spicy Pie.

*I believe I had 11 bands from my Coachella 2015 Perfect Poster Wish List make the actual poster. Please check my math so I can buy myself a 9-dollar Heineken Light.

*Is Circa Survive EMO? How bout Brand New?

*Nice to see the return of a little chillwave.

*Speaking of chillwave, the Steely Dan chillwave classic “Hey 19″ is sure to be included on the mixtape.

*This is like the fifth year in a row that Day 3 is the weakest day, WTF.

I will begin to unveil my TOP 40 Coachella Bands starting on February 25th.
GoINDEEpMusic

Coachella Reflects With Video “Desert Parallax”
The Replacements Are Coming!