Oxford, England indie rockers Foals have announced their fourth studio album What Went Down will be released on Friday August 28 worldwide.  The new album is the follow-up to the incredible 2013 LP Holy Fire.  This week the band shared a stunning video for the lead track from the album, also titled “What Went Down.”

Recently, frontman Yannis Philippakis said the band’s forthcoming album will be “heavier, poppier and weirder” than 2013’s Holy Fire. The singer described pushing the sound “so the extremes were further apart”, adding that Nick Cave has heavily influenced his lyrics. “We felt that the spread on Holy Fire was good but on this we wanted to push it out even further, so the extremes were further apart. The heavier songs are heavier, the poppy songs are poppier and weirder.” 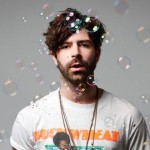 Furthermore, Mr. Philippakis said “this new stuff’s going to decimate venues; we’re itching to play it,” he added,“it’s going to be fun to get back on stage and obliterate places.”  Can’t Wait!!!

Folks, if you’re not excited about marking your calendar for August 28th after one listen to the title track below, then shame on you… seriously.

Hold on to your seat, here it is:

What Went Down tracklisting: