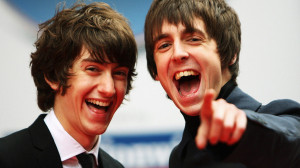 The Last Shadow Puppets are an English indie rock supergroup formed in 2007 by Alex Turner of the Arctic Monkeys and Miles Kane of The Rascals.  They would later recruit James Ford from Simian Mobile Disco and Zach Dawes (no relation to the shitty folk-rock band Dawes) from Mini Mansions to complete the quartet.  Turner and Kane met when Kane’s former band Little Flames were supporting the Arctic Monkeys on their 2005 tour.

The group released their baroque pop debut album The Age Of Understatement four days before the Coachella Music Festival in 2008.  Since 2009, both Turner and Kane threatened to record a second TLSP album, but nothing ever materialized.  Late last year, the band finally announced plans to drop the follow-up album, and have since released three singles from it.  You may have heard Sirius XMU overplaying “Bad Habit” and the title track “Everything You’ve Come To Expect.”  Recently, the third single “Aviation” surfaced.  Jenny LSQ and her colleagues haven’t had enough time to ruin that one yet.  The sophomore album will be in record stores next Friday.