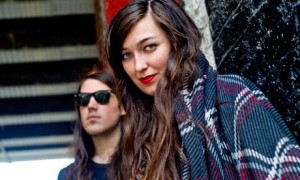 The NYC indie pop band Cults plan to release their follow-up to the their self-titled debut on October 15. Reports have the band
expanding the their style by working with producer Ben Allen whose resume includes Animal Collective, Washed Out, and Youth Lagoon. The sophomore album titled Static was announced with a 60 second album teaser that features the album tracks “We’ve Got It” and “So Far.”

Check out the video “You Know What I Mean” from the 2011 self-titled album.