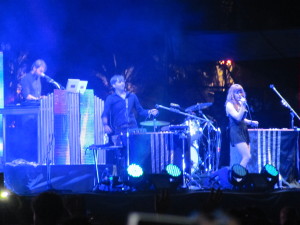 The Postal Service have released a 14 minute documentary via The Creators Project that was shot behind the scenes at their recent appearance at Barclays Center in Brooklyn. The electronic supergroup consists of Ben Gibbard (Death Cab For Cutie), Jimmy Tamborello (Dntel), Jenny Lewis (Rilo Kiley), and touring member Laura Burhenn (The Mynabirds). The band is currently celebrating the 10 year anniversary of the indie classic album Give Up with a tour and deluxe reissue of the album. Fans of The Postal Service should make time for the 14 minute documentary.

Check out the video for “A Tattered Line Of String”