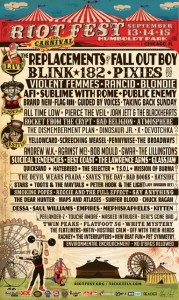 Never in my wildest dreams could I have ever imagined a day when The Replacements and the Pixies would appear together on a concert poster. Wake up… it’s for realz. Riot Fest Chicago has added the Pixies to the September 13-14-15 festival. This is the first U.S. show that the Pixies will feature “New Kim” Shattuck on bass. Ms. Shattuck has taken over for the recently departed Kim Deal. No need to stress Pixies fans, there will be many, many, many more U.S. dates announced in the near future,

Upon further review, I would like to congratulate the organizers of Riot Fest Chicago! Not only were you able to procure two of the greatest rock bands of all-time, you then placed them on the poster next to the two shittiest bands of all-time…..