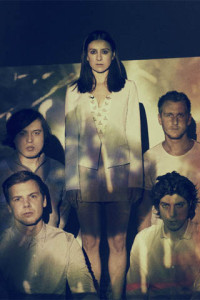 Every Sunday we take an INDEEp look into an emerging indie artist. This week we Shine the Sunday Spotlight on HAERTS.

HAERTS, yes HAERTS, no misspelling there folks. The indie pop band led by frontwoman Nini Fabi hail from Brooklyn, NY and Germany. The band set the blog world buzzing late last year when the single “Wings” surfaced. The infectious synth-pop vibe of “Wings” will have you hitting repeat, trust me. This week the band announced the soon-to-be released debut EP Hemiplegia on September 17. The five piece will soon embark upon a tour that has them supporting Washed Out.

In preparation for the release of Hemiplegia, the band unveiled a video of some behind the scenes studio work (check it out here):

Check out the video for “Wings” here: