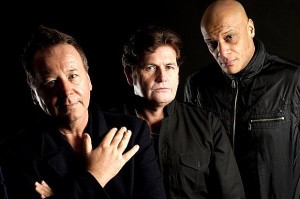 Last Tuesday evening the heritage act Simple Minds played to a sellout crowd at the historic Orpheum Theatre in downtown Los Angeles. The Glasgow, Scotland based band performed on United States soil for the first time in eleven years. The band has been touring the world since 2011 playing what is being billed as a Greatest Hits Tour, and finally decided that seven North American dates were worthy
enough. The entire evening showcased the group with two solid sets (see setlist below) broken up by a twenty minute interval, with no supporting act.

The brilliantly shaped sets took a magnificent journey through the band’s entire history. Some of the band’s early work was included in the second set with the opener “I Travel” (watch below) and “This Fear Of Gods” from the 1980 album Empires and Dance. The 1982 album New Gold Dreams (81,82,83,84), was showcased with “Glittering Prize” and “Someone Somewhere In Summertime,” along with the title track closing set one and “Promised You A Miracle” closing set two. The underrated 1984 album Sparkle In The Rain, placed “Waterfront” and “Up On The Catwalk” right out of the gate in set one. Their 1985 classic album Once Upon A Time was featured four times, with the title track and “All The Things She Said” appearing in the first set, while “Sanctify Yourself” and “Alive and Kicking” were part of the three song encore.

Back in March, Simple Minds released a career spanning multidisc retrospective titled Celebrate. The album is available in a few different of versions, including a 50-track 3-disc set (download below). The band opened the evening with Broken Glass Park (watch below), a brand new single that is included on Celebrate.

During the first set Mr. Kerr paid tribute to the late Michael Been, frontman of the American rock band The Call. They performed a cover of The Call’s classic tune “Let The Day Begin,” and following the song called Michael “a beautiful man.”

The capacity crowd of nearly 2000, ranging from fans in their early forties to mid-sixties (yep), were all brought to their feet during the band’s widely popular hit from the John Hughes film The Breakfast Club, “Don’t You (Forget About Me). The seated event, which is normally not my cup of tea, wasn’t all that bad. I stood for most of the show in the balcony, and surprisingly not one jag yelled “hey, down in front.” The twenty minute interval was pretty cool too, it allowed us old folks to hit the restroom without missing a thing, in addition to unfortunately finding out that the merch stand was completely sold out. The band played for nearly two hours, starting fashionably late at half past eight (to accommodate the late arriving L.A. crowd), and finishing up right before the eleven o’clock curfew.

Since leaving Los Angeles last Tuesday the band has played New Jersey, Washington D.C., Boston, Montreal, and Toronto. The North American leg comes to an abrupt end tonight at the over-ambitious 3200 seat Roseland Ballroom in NYC. Jim Kerr has been critical of U.S. fans recently, citing they better show up or were never coming back. I did my part. 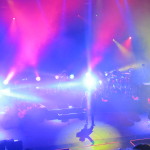 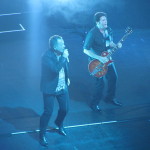 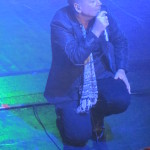 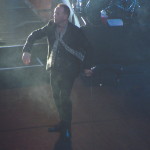 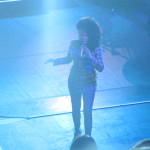 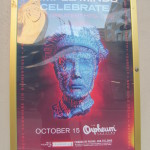 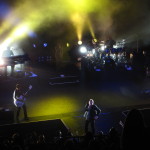