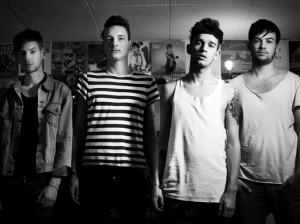 The 1975 are an English alt-pop band that have been making music since 2002. In 2012 the Manchester based band finally settled on the name The 1975. Prior to their current moniker, the band used the names Talkhouse, The Slowdown, Bigsleep, and Drive Like I Do. Frontman Matthew Healy says that the name was inspired by scribblings found in the back page of a poetry book dated 1 June, The 1975.

The 1975 released their full-length self-titled debut back in September. Prior to that, the band released a series of four extended plays. The quartet has been compared to The Big Pink, but I’ll need quite a few more listens to be on board with that one. The band cites Talking Heads, Brian Eno, My Bloody Valentine, Peter Gabriel, and none other than “from now on Coachella is Prince’s house” as their musical influences.