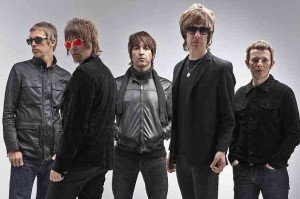 Like I said, I do this in a random order. Last night I noticed that Oasis was planning an announcement today, and thought that I could tie that in nicely with a Beady Eye post, that is until today. What started out as a beautiful morning and most wonderful Day 1 in the world of Fun Coachella Games, comes the news that Beady Eye has been removed from the poster. At the time of this post there is no official word from the band or Coachella on the reason why. There will be rumors, the biggest one is that Oasis will now be a “Late Add” and take over the top line on Day 2. Let me be the first to tell you that ain’t happening, unless Oasis was already booked under the moniker Muse. Happy list updating day. I’ve decided to continue with the post basically because it was hard enough to find 77 Bands to begin with. Anyway on the band.

Beady Eye are an English rock band made up of former members of Oasis, with the notable exception of Noel Gallagher. The four former members of Oasis include Liam Gallagher, Gem Archer, Andy Bell, and Chris Sharrock. The quintet is rounded out by former Kasabian bassist Jay Mehler. The band formed in 2009 shortly after Oasis split, well Noel Gallagher left, the band continued, and that’s another story for another day.

The band has released two studio albums: Different Gear, Still Speeding in 2011 and the 2013 release Be. Liam has said that he has the confidence that the Beady Eye project can be better than Oasis, good luck with that. The band has been warmly received by Oasis fans but not by the masses, up to this point the band has only one U.K. Top 40 single to their credit.

I was actually looking forward to seeing Beady Eye, figuring that was about as close to ever seeing Oasis as I was going to get. The band includes Oasis tunes in their set which would have made for a fun time at the main stage around 5:45 on Sunday. Looks like I’ll be taking another spin on the Ferris Wheel instead.

BTW, Oasis announced today that they will be reissuing their first 3 albums:
“Definitely Maybe,” “(What’s The Story) Morning Glory,” and “Be Here Now.” The classic album “Definitely Maybe” amazingly turns 20 this year. For fun watch “Live Forever” below. Not the news that should cause Beady Eye to be taken off the poster. Let the rumors begin! Oasis 2015.