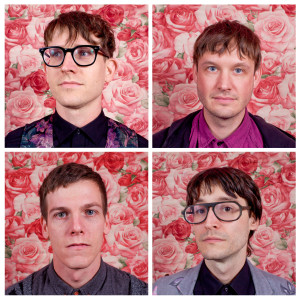 STRFKR is a indie electronica band that formed in 2007 in Portland, Oregon. The act started out as a solo project by founder Joshua Hodges, who had grown tired of his previous band Sexton Blake. Josh started out playing basement shows around the Portland area for anyone looking to dance and have a good time. As an act of refusal to the rock band cultural, the lad would perform under the moniker Starfucker. Surely, there was no way for an act with such a stupid nonconforming name like that, could possibly catch on? Wrong, not only did it catch on, but he needed to recruit friends to complete the squad as a quartet, and then they cut their first album in 2008.

The band considered a name change early on in their career to PYRAMID or Pyramiddd, but stuck with the eye-popping name. Surprisingly, Target used the tune “Rawnald Gregory Erickson The Second” in a commercial in 2009.

In 2012 the band decided to shorten the name to STRFKR, I’m not quite sure the exact reason, but here are a few possibilities:
1. To get their compact discs stocked on the shelves of Best Buy.
2. The band was tired of being known as “that band with all the asterisks.”
3. What started out as not about the money, is now totally all about the money.

The band released three studio albums under the old moniker and their latest release under the new one:
Starfucker (2008)
Jupiter (2009)
Reptilians (2011)
Miracle Mile (2013)

It doesn’t matter what these dudes are known as, they’ve been making groovy beats all along. The Gobi should GO OFF around 3pm for this one!