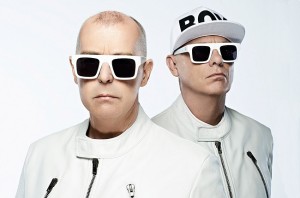 Pet Shop Boys are an English electronic duo that consists of Neil Tennant and Chris Lowe. Formed in 1981, the two have enjoyed a lucrative career, and are regarded as one of the most successful pop duos of all-time.

Originally they called themselves West End, after an area in London, but later switched to Pet Shop Boys, named for friends who worked at a Pet Shop. The two enjoyed immediate success with the release of their first single “West End Girls.” The tune was originally released in 1984, but didn’t top Casey Kasem’s charts until it was rereleased in the States
in 1986. The debut full-length Please followed, and so did the hits: “Love Comes Quickly,”
“Opportunities,” “Suburbia,” and the aforementioned “West End Girls.”

Their music packed dance floors in the eighties, as the hits kept rolling. Their 1987 sophomore LP Actually produced the singles “It’s A Sin,” “What Have I Done To Deserve This” and “Rent.” Their second best selling album Introspective dropped in 1988 and produced the club favorite “Domino Dancing,” along with the other singles “Left To My Own Devices” and “It’s Alright.” Also included on the album was a cover of the Elvis Presley tune “Always On My Mind,” released to commemorate the tenth anniversary of the Elvis’ death at the time.

The duo went on to release four albums in the nineties, including Very, their highest selling album of their career in 1993. The act has stayed active and relevant for the better part of the last thirty years. Since 2002 the Pet Shop Boys have released five more studio albums, including the most recent, Electric in 2013. Overall, Tennant and Lowe have released 12 studio albums (all with one word titles), 55 singles, and sold over 50 million records worldwide.

In 2003 Pet Shop Boys were recognized by Billboard as being the #4 most successful Dance/Disco act from 1974 – 2003, finishing behind only Madonna, Janet Jackson, and Donna Summer. It was only a matter of time before this blog referenced Donna Summer.

Mr. Heritage can’t wait for this one and it better not conflict with CHVRCHES. I’m hoping for one of those midnight shows in the Mojave, similar to last years New Order show. This should be fun, don’t forget your dancing shoes, or your loafers…