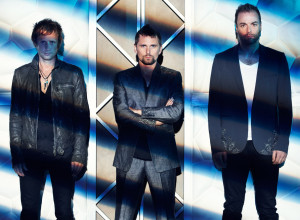 Muse is an English alternative rock band that formed in 1997. The band consists of Matthew Bellamy (vocal, guitar), Chris Wolstenholme (bass), and Dominic Howard (drums), all friends from school. As early as 1994, at the tender age of thirteen, the trio played under the names Gothic Plague, Fixed Penalty, and Rocket Baby Dolls, before settling on the name Muse in 1997. The band’s sound is a fusion of progressive, space, and alternative rock, with a light dusting of electronica. Bellamy serves as the band’s pianist.

The band is headlining the Coachella Festival for the second time in five years, and making their third appearance overall. Their high energy shows are an extravaganza, which in turn has placed the band in the conversation as The Best Live Act In The World.

Up to this point in their career, Muse has released six studio albums. My favorite has always been the 2003 release Absolution, that album is home to my fave Muse tune “Time Is Running Out.” Most of their albums have been received with critical acclaim,
especially in the U.K., the States have grown to dig their stuff since 2006, we’re always slightly late to the party. For fans of the band, and those unfortunate souls that have never seen them live, Muse has also released a handful of live recordings. The 2008 H.A.A.R.P. Live From Wembley is worth picking up.

I’ve heard some grumblings out there in blogville concerning this years lineup, about how they could of done a better and fresher job on the top line. Well, I’m here to tell you I think they did a decent a job based on the U.S. festival options provided this year. Who would you rather have? Eminem? Lionel Richie? Kanye West? Elton John? Kings Of Leon? Just think, if they would have booked Kings Of Leon… you would be worried about catching the measles out in the desert.

Recently Muse needed to cancel shows due to illness (not measles), but the band says their headlining spots at Lollapalooza Brazil and Coachella should be all systems go, something to keep your eye on. I’m sure by now Goldenvoice has put the Red Hot Chili Peppers on-call for next weekend.

I think Coachella did well on the top line, besides Muse is fun!

“Time Is Running Out”