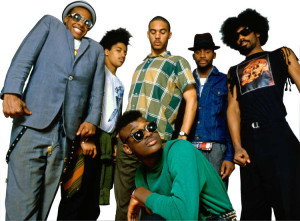 Fishbone is an alternative rock Heritage Act that formed in Los Angeles in 1979, when they were in junior high school. The band’s unique sound fuses rock, ska, punk, soul, and funk. The current seven-piece collective consists of three original members, including frontman Angelo Moore aka Dr. Madd Vibe, more on that imbecile later.

The group enjoyed the most success during the mid to late eighties, and developed a cult following around the L.A. club scene. They dropped their first single “Party At Ground Zero” in 1985, and then followed it with a self-titled EP. The band’s full-length debut In Your Face dropped in 1986, two years later they released the critically acclaimed album Truth And Soul. The 88′ album housed some of their more popular material such as “Freddie’s Dead” and “Ma And Pa” (a DJ DEEp fave). In 1991 they released the album The Reality Of My Surroundings, the highest charting album in the band’s career. The LP sported the singles
“Fight The Youth,” “Everyday Sunshine” and “Sunless Saturday.”

The band went on the release four more studio albums, however they never achieved the moderate success they enjoyed between 1985 and 1991. Furthermore, the band was never recognized when the “third wave ska revival” hit in the mid nineties. Well, that’s probably better for the band, since that would have meant being mentioned in the same breath as god-awful acts such as 311, No Doubt, Sublime, Reel Big Fish, The Mighty Mighty Bosstones, and Rancid. Man, that was some awful music back then.

Now on to Mr. Moore, seems that Dr. Madd Vibe feels that fans want to “be on the edge” when attending a Fishbone show. That’s why he makes a habit of stage-diving into the crowd on a regular basis. One problem, at a show in Philadelphia in 2010 he landed on 46 year-old Kimberly Myers and broke her skull and collarbone. The band now owes Ms. Myers, a New Jersey mother of three, a cool crisp 1.4 million in compensatory and punitive damages. By now you’re asking yourself what in the hell is a 46 year-old mother of three doing indeep… the same thing a 45 year-old father of two is doing down deep.

I see these dudes playing a 4pm set on the main stage, for safety, watch them from the ferris wheel. It’s gonna take more than just one Coachella appearance to pay that off.