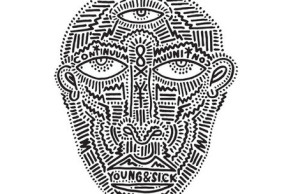 When I started out sculpting this enormous task I had 75 acts on my list. I figured I would hold out for some “late adds” and then add two more to my list after the fact. Courtney Barnett was added, but nothing worth writing about since. The musical act I’m writing about today was the last one added to my list (for those of you that keep track of that sort of thing). I’m still holding out for a Pixies “late add.” It made perfect sense initially that they should have been on the poster from the beginning, and since then, they scheduled a show in Big Sur, Ca. between Weekend 1 and Weekend 2. Maybe they’ll surprise us, they seem to enjoy surprises lately. If you missed it last week, The Naked and Famous switched days from Saturday to Sunday.

Young & Sick is a R&B music and art project based in Los Angeles, California. Next week around this time I’m going to be Old & Sick, that’s when Goldenvoice releases the set times and I puke all over my computer screen. Conflicts are brutal, and worst thing about them, we know they’re coming.

Nick Van Hofwegen is the mastermind behind Young & Sick. The Dutch artist was recently recognized by The Wall Street Journal has a “double threat” to art and music industry. The act has been cited recently as a band on the come by Stereogum and BBC Radio 1. The self-titled full-length debut LP is expected next Tuesday. Nick performed his first show as the Young & Sick two months ago, amazingly, he was booked for Coachella before he ever performed live.

Mr. Van Hofwegen designed the artwork for the album Torches by Foster The People, and dude’s first fashion design was featured in Urban Outfitters, good for him! I wonder if he will contribute anything to that fancy Coachella art?