Present-Tense here giving daver a bit of a break. He’s currently consulting with Coachella to work out a 4 hour set for the Replacements. I’m helping to dig deep into the 2014 Coachella Music Festival lineup, featuring one band per day. The purpose of this piece is to assist in difficult decisions that inevitably you’ll need to make, as well as, serve as a fun countdown to Coachella Week. Note: All bands appear in a completely random order… Enjoy, and let the countdown continue!

Warpaint are a 4 piece band from Los Angeles, California that specializes in low key psychedelic pop. They have been compared to the Cocteau Twins and Joni Mitchell (If she was a 4 piece band playing psychedelic pop). NME has described Warpaint as “Intermittently emerging from plaintive moods into harder rocking, they play expansive, lushly-harmonic psych-rock songs with enough time-changes to satisfy even the most beardy prog-rock bong-tokers.” LOL I love NME. ‘bong tokers’.

Fun Fact: Their original drummer is actress Shannon Sossamyn from the universally acclaimed film “Knights Tale”. She left the band to fulfill her acting career. 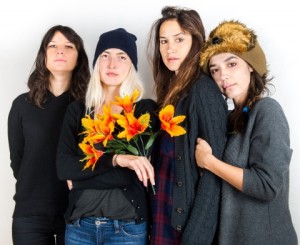 Warpaint has three releases under their belts – the debut EP ‘Exquisite Corpse’ (with Shannon Sossamyn – the actress – on drums), ‘the Fool’ (2011) and now their most recent release ‘Warpaint’ which was released in January of this year. They worked with Flood on the production of the album and if you are a fan of Depeche Mode or NIN you know who that is. I’ve listened to ‘Warpaint’ a few times through and it’s a grower. The first couple of listens I couldn’t really get into it, but after the 3rd or 4th listen it began to take hold. I’m not spinning it for the singles, but it’s a great album.

I believe this is Warpaint’s 2nd go around at Coachella and I’m excited to see these ladies perform again. I’m hoping for a sundown or late night set which would complement their sound quite nicely. I’d hate to have to catch them on the outdoor stage at 2pm.