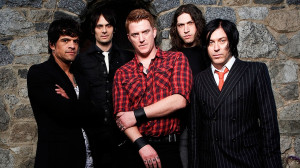 Present-Tense here giving daver a bit of a break. I’m helping to dig deep into the 2014 Coachella Music Festival lineup, featuring one band per day. The purpose of this piece is to assist in difficult decisions that inevitably you’ll need to make, as well as, serve as a fun countdown to Coachella Week. Note: All bands appear in a completely random order… Enjoy, and let the countdown continue!

Queens of the Stone Age are a desert rock band that formed way back in 1996. Formed out of the ashes of the stoner rock band Kyuss, QOTSA are categorized into the very specific subset of ‘Desert Rock’ which is basically just ‘rock n’ roll’. The media loves labels and I’m just doing my part. QOTSA have released critically acclaimed albums over the years and their group has been quite the revolving door of musicians. Several members have left (Nick Oliveri, Alain Johannes) but their sound has remained consistently awesome regardless of who they plug in their line up. The central figure since the band’s inception has been Josh Homme (a Coachella Valley native). I once had the pleasure of almost having my photo taken with Mr. Homme but I pussed out, fearful of that whole ‘meeting your idols’ thing. Queens of the Stone Age also feature a guitarist by the name of Troy Dean Van Leeuwen who just happened to play in one of my favorite bands – Failure.

Queens of the Stone Age’s debut wasn’t much of a success, but they hit it big with their second album ‘Rated R’. The song ” The Lost Art Of Keeping A Secret” propelled them into the mainstream in the late 90′s (early 00′s). It was a welcome reprieve from bull$hit like Creed, Days of the New and Eve6 (sorry Sean). As a follow up they delivered yet another huge hit ‘Songs for the Deaf’ in which they were aided by Dave Grohl on drums. “No One Knows” was all over the radio in 02′. The only thing they probably regret is licensing the track “You Think I Ain’t Worth a Dollar, But I Feel Like a Millionaire”  to the Vin Diesel flick XXX. Their follow ups, “Lullabies to Paralyze” and “Era Vulgaris” were solid albums, but sales never quite approached that of “Songs for the Deaf”. Which is a shame because both of those albums are worthy additions to the QOTSA discography. 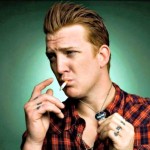 Over the years, Josh Homme has been sidetracked by various side projects (Them Crooked Vultures, Eagles of Death Metal) as well as a life threating injury, but he finally got the band back together (with some very special guests) in the last year or so. Their new album ‘…Like Clockwork’ features notable guests such as: Dave Grohl, Elton John and Trent Reznor.  As a result, ‘…Like Clockwork’ was nominated for the “Best Alternative Rock Album” at the Grammy’s. Queens of the Stone Age were invited to play and performed with Trent Reznor and Lindsey Buckingham until they were cut off by a commercial or something for Two ½ Men.

If you haven’t given Queens of the Stone Age a listen, do yourself a favor and check out their six albums. You won’t regret it.

It’s been over 10 years since QOTSA has played Coachella and I’m eagerly awaiting their Saturday set. Hopefully they’ll bring some friends.

My God is the Sun

Lost Art of Keeping a Secret

Indie On TV Alert For The Week Of 4/7/14
Pixies Added To Coachella! Set Times Revealed