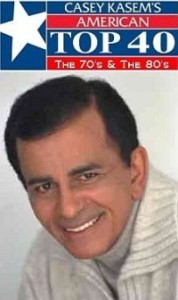 This past weekend sad news surfaced on the passing of iconic radio personality Casey Kasem.  Mr. Kasem is best known for hosting the syndicated radio program American Top 40.  His other claim to fame is providing the voice for “Shaggy” in the cartoon Scooby-Doo.

I hold Casey Kasem personally responsible for my passionate obsession with music, along with my infatuation with lists and making lists.  As a kid growing up in the late seventies and early eighties I spent an inordinate amount of time listening to Casey on Sunday mornings as he “counted down the hits from coast to coast,” documenting it on a legal pad every step of the way.

“Keep your feet on the ground, and keep reaching for the stars”