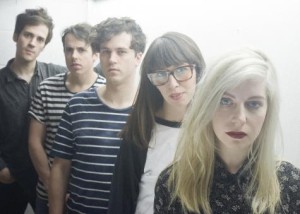 The Toronto-based jangle pop quintet Alvvays (pronounced Always) comes in at #28 on my list of Coachella 2016 must-see acts.

I originally had Alvvays much higher on my list until they were announced as the opening act for the sold out CHVRCHES show on April 13 in San Diego.  In the event I run into traffic or my dinner goes too late and I miss Alvvays’ opening act, I’ll catch them at the Empire Polo Field.

First it was deer-bands, next it was beach-bands, and now the ridiculous trend seems to be V-bands.  When does all this nonsense stop?

The group released their self-titled full-length debut back in 2014.  They’re currently working on new music which I’m sure they plan on sampling in the desert next month.  By now you know my opinion on new music that’s not supported with an EP or LP…. If I wanted to hear your new music, I would go and see you next year.