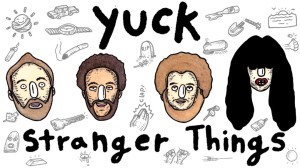 GoINDEEpMusic will be out at the Soda Bar in San Diego, California for an evening with Yuck.  The London-based indie rockers recently fired up their North American tour, and are fresh off of multiple appearances at SXSW in Austin, Texas last week.

The group is touring their third studio album Stranger Things which dropped back on February 26.  This is the band’s second album since Max Bloom to over lead vocal duties, he replaced departed founding member Daniel Blumberg.

Tonight will be my second encounter with the band, the first coming at “Winter Chella 2012.”  The moment Yuck hit the Outdoor Stage in 2012, the skies darkened, the wind kicked up to hurricane-like force, and it began to rain, seriously, at Coachella.  The wind was so bad during their set, it was impossible to hear the early 90′s influenced lo-fi quartet go at it.

Here are some vids from the show and the setlist.