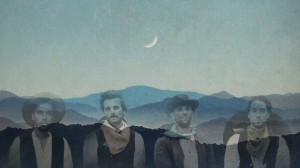 Lord Huron is another band on my list that I was planning on seeing again in theatre playing a full set, not at Coachella. Oh well.

The band’s been around since 2010, originally from Michigan, now based in Los Angeles.  They’ve released two studio albums, the 2012 offering Lonesome Dream, and 2015′s hugely underrated effort Strange Trails.  I played the shit out of that CD last year.

I remember the band playing a delightful indie folk set in the Mojave Tent back in 2013, not quite sure how I remember that, with all the Jack that got drank that morning.  Furthermore, I still have the setlist from that show, written up on a paper towel.

Are they big enough to play sundown on the main stage? That remains to be seen.