Nothing can be easy, can it?  Seriously, the New Order set on Sunday night begins 20 minutes before the Real Estate set ends.

The first day of the 2017 Weekend 1 Coachella Music Festival has officially started, and my list of must-see bands thankfully comes to an end. 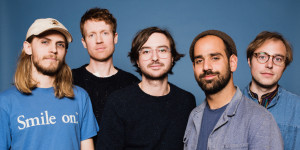 The #1 Band on my list is the indie rock band Real Estate.  In honor of Real Estate being at the top, I took the liberty of making one of those fun Spotify Mixtapes, featuring nothing but Real Estate tunes, check it out down below.

The quintet is originally from Ridgewood, New Jersey, but now calls Brooklyn home.  I guess when you become a band on the come, you start calling Brooklyn home.

Since forming in 2009, the band has released four well-received albums.  Their self-titled debut arrived in 2009, followed by Days in 2011, and Atlas in 2014.  A few weeks ago they presented the world with their fourth studio album In Mind.

The band has said fellow New Jersey indie rockers The Feelies are one of their main influences, another reason I really dig these guys.

Prior to the release of In Mind, founding member Matt Mondanile left the band to focus exclusively on the project Ducktails.

I’m happy Coachella 2017 has finally arrived, I’m happy this list is finally over, I’m not happy about these set times, I’ll see you in the desert.

Enjoy some Real Estate vids and check out that Mixtape: