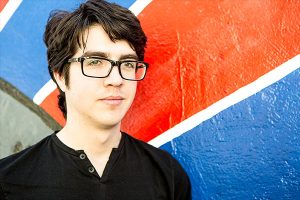 Do you know what the world needs more of?  Bands like Car Seat Headrest, seriously.  What a breath of fresh air to the indie rock scene this guy has been.

The man behind the moniker Car Seat Headrest is lo-fi extraordinaire Will Toledo.  Dudes been making music since 2010, basically out of his bedroom.

I never heard of him until 2015, but apparently, he’s been putting out albums faster than Guided By Voices and Ty Segall combined, who knew.  His latest effort Teens Of Denial, which is almost a year old, is his thirteenth fucking album.  No shit, 13!  The track “Fill In The Blank” was one of my favorite tunes of 2016.

Back in 2010, he used to throw albums up on his online store with a warning that read: the music isn’t very good.  What a fun way to market oneself!

Based in Seattle by way of Williamsburg, Virginia, the one-man act has now blossomed into a full on four-piece band.

Surprisingly, Car Seat Headrest is actually playing on Saturday and not on Friday.