Do you enjoy sloppy Replacements-inspired indie rock? Well, Twin Peaks may just be what the doctor ordered on Sunday at the 2017 Coachella Music Festival.

I’ve been singing the praises of the band Twin Peaks for a few years. 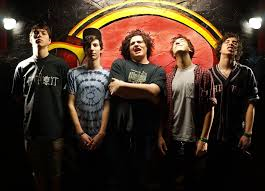 Twin Peaks was formed back in 2010 while the dudes were still in junior high school.  The Chicago-based quintet has released three studio albums, their debut Sunken was released in 2013 to earn enough gas money to go out on tour, all while the kids were still seniors in high school..  Their sophomore effort Wild Onion followed a year later, and then last May Down In Heaven arrived.

The band is cut from the same mold that brought us The Orwells.  That Orwells 2015 Coachella show was fun!

The band is named after the restaurant chain not the television series, so they say.

See you down on the rail.