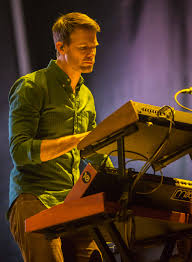 Tycho is the moniker for ambient music extraordinaire Scott Hansen.  Based in San Francisco, Mr. Hansen has released five studio albums, the most recent being 2016’s Epoch.

Scott’s been making ambient avant-pop psychedelic-instrumental-post-rock tunes since 2002, and has a full band touring with him since 2010.  Using the term ambient is fun, who knew!

Scott is also known as ISO50 for his photography and design work.

Tycho is making its second Coachella appearance, they also hit the festival back in 2015.  I remember watching Tycho’s Weekend 1 performance on the YouTube live stream that year.  I really wanted to check out that show during my Weekend 2 visit, but had a conflict with Jack White’s headline set.  Hopefully, there won’t be any conflicts to speak of this year.  Tycho is schedule to perform on Saturday.

Enjoy some of Scott’s ambient melodies below: